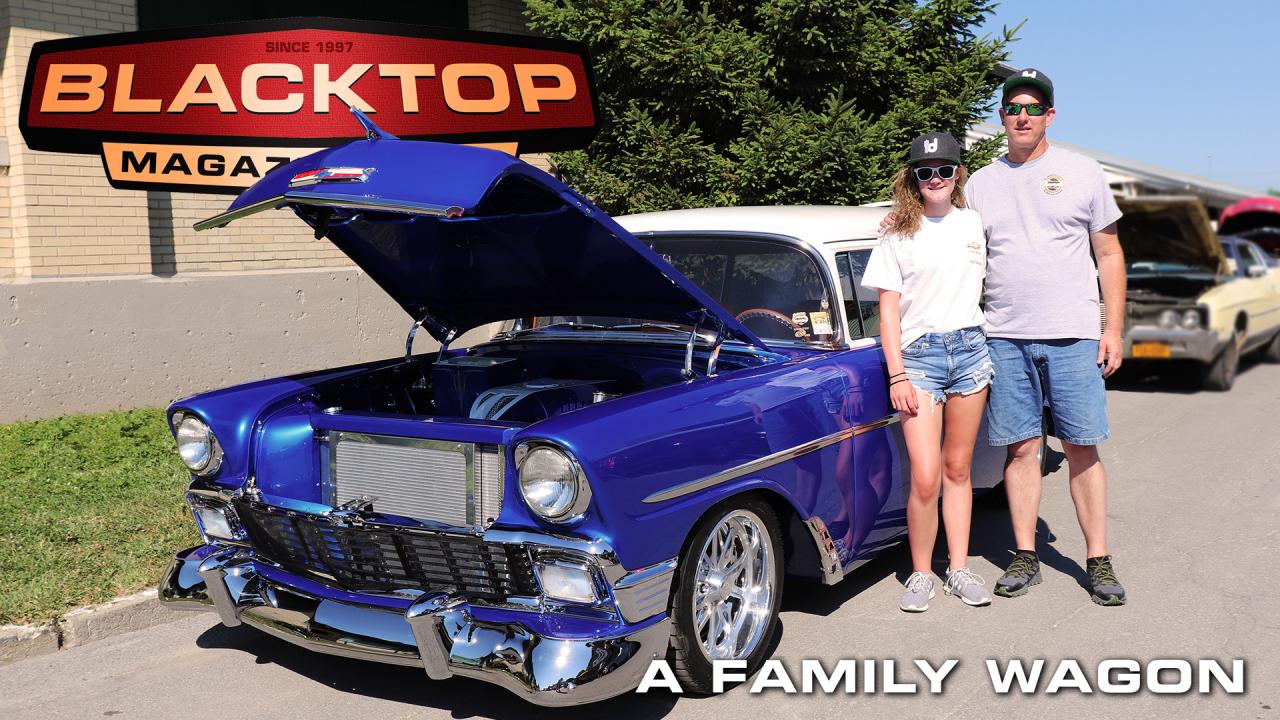 Last year, the “I Did It With ididit Tour” stopped at the largest car show on the east coast: The Syracuse Nationals earlier this year. On the first morning, we strolled right to an impressive 1956 Chevy wagon. Certainly, there was an ididit steering column in it. IDIDIT was surely impressed by the car, but more so the story of the father/daughter team that built it. “These are the type of customers that we are on this tour to meet.We want to showcase amazing grassroots builders and the stories behind the incredible cars they spend their evenings and weekends restoring and building.” The father-daugher duo were awarded the limited edition I Did It With ididit Tour Allstar “Keep Building” hat after hearing the story behind the ’56 Wagon. And it is a story worth telling. We followed up with Dad; Chris and Daughter; Jerica to get the scoop behind the build. At 13 years old, Chris Hepler was building a really neat mini-bike. It’s just something boys in his neighborhood did. He sold that mini-bike to buy his first car, a 1968 Chevelle. His brother had a ’56 Chevy Bel Air and although he liked the car, he didn’t want to copy his brother. A neighbor had a ’56 Chevy wagon that looked like the right project for him. He asked for years if he could buy it to the same negative answer. The neighbor then wrecked the car on the driver’s side and still wouldn’t sell it. Then one-day, a buddy of his showed up with the car. WHAT? How did you get it? I have tried for years to buy it! His buddy said it took 4 cases of beer and 3 hours to pry it from the neighbor’s hands. After offering $500 more than he paid, his buddy finally sold it to Chris. The car was a beater. The intention was to fix the rocker and the quarter panel and drive it like it is. The front of the roof was caved in as if a car was parked on top of it. Fast-forward a couple or more dozen years, and now a family man; Chris is working in the garage on the beater he struggled for years to buy. His daughter Jerica comes in the garage asking all kinds of questions on what he is doing with the car. Ever the patient man, Chris teaches her the difference between standard and phillips head screwdrivers, socket sizing and all the important techniques of wrenching. One thing led to another and the car was getting a full makeover. The ever-inquisitive Jerica keeps asking more questions and before you know it the now 13 year old is helping him finish up this 6 year build on a beauty of a long-roof. Chris is just pleased that after having two girls, that one was interested in wrenching as much as he is. The younger daughter and mom come to the car shows with them, and Chris admits, it’s not their thing, they like to do things together when Chris and Jerica are at car shows, swap meets and other fuel fed fun. Dad finds it fascinating that she is the same age he was when he started wrenching. Now that the car is complete, Jerica is itching to get back in the garage. She points to dad’s ’66 Ford F100, saying that she could drive that soon with a bit more wrenching that is. With that she is proud to say: “I did it.” We are proud to see younger generations interested in this crazy hobby of ours.